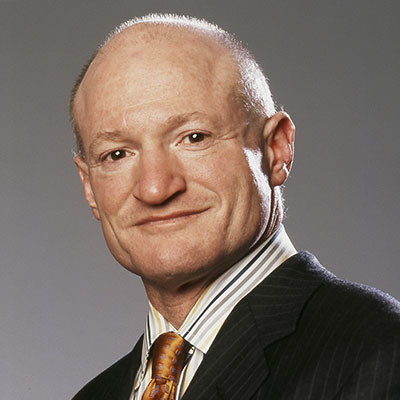 James H.M. Sprayregen is a Restructuring partner in the Chicago and New York offices of Kirkland & Ellis and served on Kirkland’s worldwide management committee from 2003-2006 and 2009-2019. Mr. Sprayregen is recognized as one of the outstanding restructuring lawyers in the United States and around the world and has led some of the most complex Chapter 11 filings in recent history. He has extensive experience representing major U.S. and international companies in restructurings in and out of court and has handled matters for clients in industries as varied as manufacturing, technology, transportation, energy, media, retail, and real estate. He has extensive experience advising boards of directors, and generally representing debtors and creditors in complex workout, insolvency, restructuring, and bankruptcy planning matters worldwide.

Chambers & Partners has praised Mr. Sprayregen for his “outstanding reputation for complex Chapter 11 cases” noting he is a “great clients’ lawyer, admired for his unflustered ways.” Chambers said that clients it spoke to noted that he is “probably the best restructuring lawyer in the world.” Most recently, sources commented that Mr. Sprayregen is “a premier restructuring expert” and “in a class of his own” with “unbelievable technical capabilities” and “deep experience he can draw upon.”  Prior editions of Chambers guides have described Mr. Sprayregen as “a world-class practice leader,” “one of the deans of the Bar,” and “a restructuring genius and one of the best strategists in the country” noting that clients look to him as someone who is “providing leadership and strategic guidance on the big issues.”

Mr. Sprayregen joined Kirkland in 1990 and built its international Restructuring Group. He joined Goldman Sachs in 2006 where he was co-head of Goldman Sachs’ Restructuring Group and advised clients in restructuring and distressed situations. He rejoined Kirkland three years later. Mr. Sprayregen is a frequent lecturer, speaker, and writer on insolvency, cross-border, and distressed M&A issues. He has served as an Adjunct Professor at the University of Chicago Booth School of Business, New York University School of Law, and the University of Pennsylvania Law School.