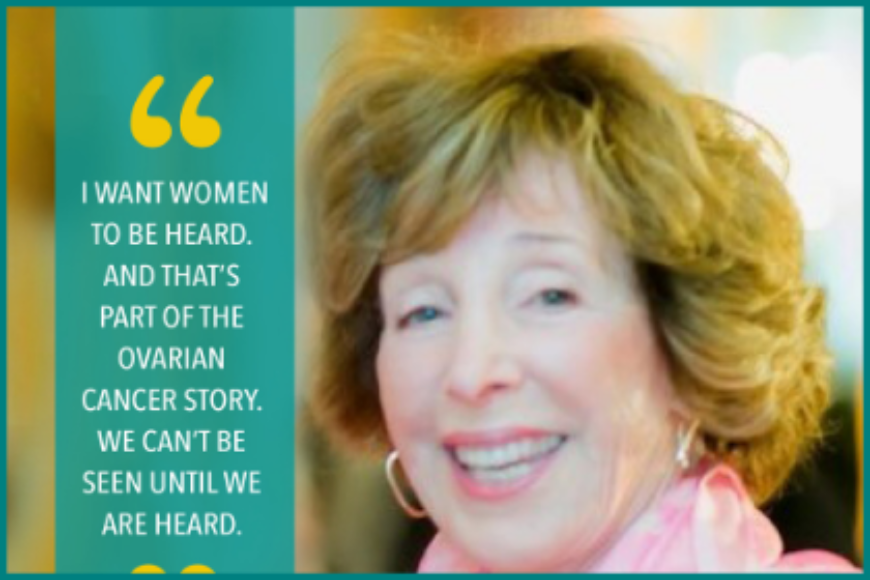 We Can’t be Seen Until We are Heard 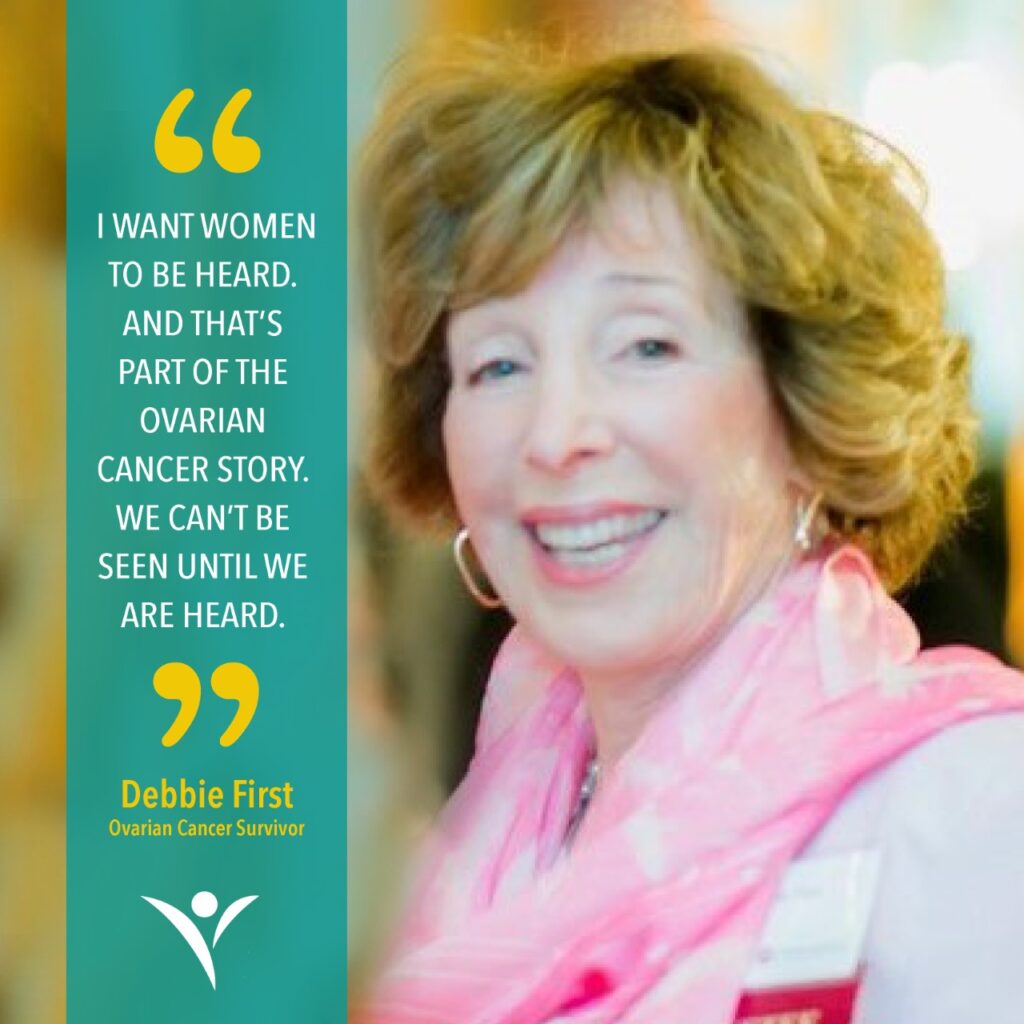 “Goes where angels fear to tread.”

That is what women’s health advocate, communications expert and ovarian cancer survivor Debbie First responded when I asked her to tell me her six-word memoir. After an in-depth and inspiring conversation with her, I learned that this description is spot on.

Debbie was diagnosed with ovarian cancer when she was 37 years old with a career and three young children. It was 1977, a time when very little was known about women’s cancers, especially ovarian cancer. She refers to the first time she spoke publicly about having the disease as “coming out” because it wasn’t something that she talked about. This was before all the pink and teal ribbons, before the galas and before most people knew the term “oncologist.”

Debbie experienced subtle symptoms much like other women – bloating, pressure, and a lump in her abdomen. Like today, no early detection test for ovarian cancer existed. Her surgeon said he was 99.5% certain it was a benign cyst, but when she woke up from surgery, she learned it was a malignant mass off of her ovary. She looked over to her husband Bob and said, “I’m not going to die.”

Debbie was treated at Dana-Farber Cancer Institute by Dr. David Livingston, who recently passed away. She describes him as brilliant, funny, kind and as someone who became a dear friend. Her specific type of ovarian cancer was rare – a germ-cell tumor called a teratoma, that had burst – and her Dana-Farber team was up to the challenge. 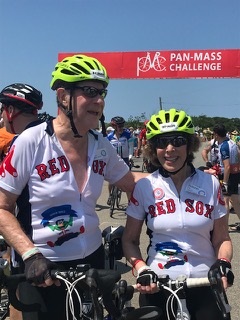 Debbie and Bob First at the Pan Mass Challenge in 2018

After successfully treating Debbie, Dr. Livingston referred to her as a miracle. At a Pan Mass Challenge event honoring Debbie, he described the challenge of treating her form of ovarian cancer.

“Imagine yourself, an English-speaking person, parachuting into Beijing in the middle of the night with the lights out and no street signs and being told, ‘Find the American Embassy.’ We had about that much guidance in what we were doing,” Dr. Livingston told the audience.

Not only did Debbie go on to survive the disease after a grueling 14 months of treatment, she continues to move the needle forward in the world of women’s cancers.

Debbie and her husband Bob, who is also a cancer survivor, have been Dana-Farber Trustees for decades. Since 2002, Debbie has served on the Executive Council of Dana-Farber’s Susan Smith Center for Women’s Cancers that through education, advocacy and fundraising is helping change the trajectory of women’s cancers. Funds raised go to the Smith Center Innovation Fund that provides grants to Smith Center scientists for early-stage, life-saving research in women’s cancers that otherwise would not be funded. 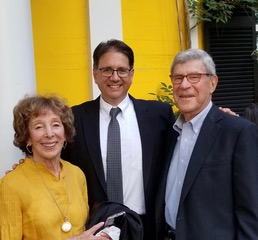 In 2007, Debbie and Bob got to know Tina’s Wish advisor, Dr. Ronny Drapkin, now Director of the Ovarian Cancer Research Center at the University of Pennsylvania. They were introduced to Ronny by Dr. Livingston and helped fund his first lab at Dana-Farber that focused on investigating ovarian cancer pathogenesis, genetics, and methods of early detection.

Currently, Debbie and Bob are major supporters of a collaborative research project led by Drs. Dipanjan Chowdhury of Dana-Farber and Kevin Elias of Brigham and Women’s Hospital. The Chowdhury and Elias lab, also funded by Tina’s Wish, is developing a blood test that looks for certain microRNAs – small, non-coding pieces of genetic material – in blood samples to detect early-stage ovarian cancer. They are now enrolling women at high-risk for ovarian cancer in their clinical study.

Debbie speaks about Drs. Chowdhury and Elias as “her guys” and hearing her excitement about their progress is contagious. She expressed how grateful she is to Tina’s Wish for supporting “her guys.”

“Tina’s Wish is not only spreading much-needed ovarian cancer awareness and gynecologic health education, but it is also creating opportunities for scientists to test their ideas and gain exposure,” said Debbie. 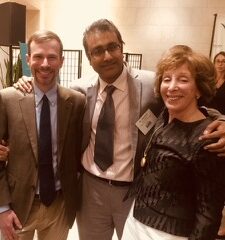 What was most apparent about Debbie is her commitment to turning ovarian cancer from a whisper to an imperative.

“I have always had an interest in advocating for women. Specifically, making sure women are accepted for what they can contribute. I want women to be heard. And that’s part of the ovarian cancer story. We can’t be seen until we are heard,” Debbie said.

Debbie also strongly urges women, especially those with a family history of breast or ovarian cancer, to consider genetic testing. When she was diagnosed with ovarian cancer, this testing did not exist. Recently she learned that she has the BRCA2 mutation and is under the care of Dana-Farber.

“Progress over the past decade in cancer research and treatment is exciting. Being open to learning and being aware of changes in our bodies helps us make informed decisions that could save our lives.” Debbie said with authority.

After our interview, I said to her “what a sense of pride you must have for all you have accomplished!” Debbie replied “I am not proud. I am grateful. Grateful to be alive, grateful for my husband, children and grandchildren, grateful for all of the brilliant doctors and researchers, and grateful I can make a difference.”

Debbie made me realize how far we have come with women’s cancers and the incredible possibilities that present themselves when humans work passionately and collaboratively. Women’s cancers are now more of a priority, and that’s thanks to people like Debbie First.