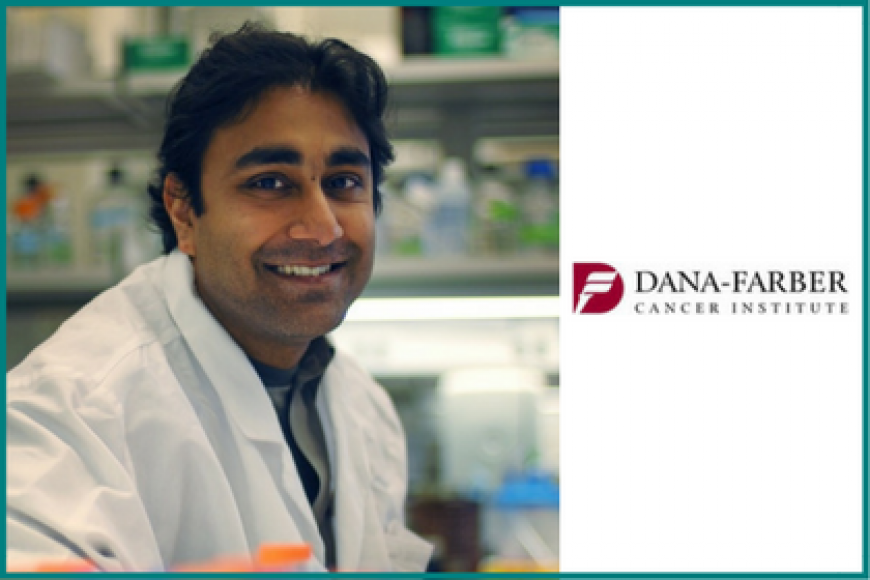 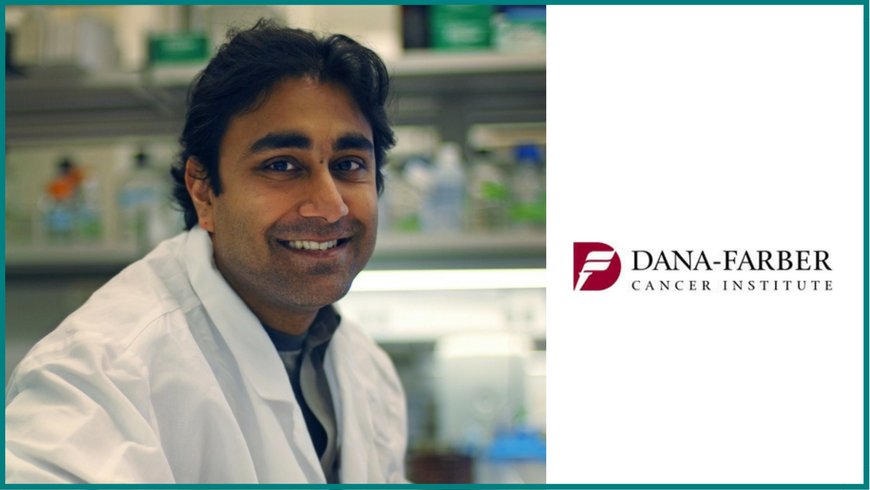 Dipanjan Chowdhury, PhD is Chief of the Division of Radiation and Genomic Stability in the Department of Radiation Oncology at Dana-Farber and an Associate Professor of Medicine at Harvard Medical School.

His lab at Dana-Farber Cancer Institute, together with Investigators from Brigham and Women’s Hospital, including Tina’s Wish Rising Star Grantee, Kevin Elias, MD, are leveraging the power of artificial intelligence to develop a new technique to detect ovarian cancer early and accurately. The team has identified a network of circulating microRNAs — small, non-coding pieces of genetic material — that are associated with risk of ovarian cancer and can be detected from a blood sample. Their findings are published online in eLife. See a lay article about the study, HERE.

Why is a diagnostic test for ovarian cancer important?

Too many patients with ovarian cancer – over 70% – are diagnosed at an advanced stage, once the tumor has metastasized. Treatment is much less effective at this point, which is why the disease has such a high mortality rate. Earlier detection has been difficult because the cancer is deep within the pelvis and symptoms do not usually manifest early. A diagnostic method that could detect the disease at an earlier stage is critical. It would give women and their families a fighting chance against this disease.

Tell us about the most exciting developments with your recent study.

The first discovery was that ovarian cancer cells and normal cells have different microRNA profiles. Unlike other parts of the genetic code, microRNAs circulate in the blood, making it possible to measure their levels from a serum sample. Together with Kevin Elias’ team, our lab sequenced the microRNAs in blood samples from 135 women to create a “training set” with which to train a computer program to identify microRNA differences between cases of ovarian cancer and cases of benign tumors, non-invasive tumors, and healthy tissue. Using this machine-learning approach, we could leverage large amounts of microRNA data and develop different predictive models. The model that was most accurately able to tell the difference between ovarian cancer and benign tissue is known as a neural network model, which reflects the complex interactions between microRNAs.

We then tested this sequencing model in an independent group of 44 women to determine the accuracy of the test. Once the accuracy of the model was confirmed, we utilized the model across multiple patient sample sets, using a total of 859 patient samples to measure the sensitivity and specificity of the model. The results were VERY exciting. The new technique was significantly better than an ultrasound test at predicting ovarian cancer. Almost 100% of abnormal results using the microRNA test actually represented ovarian cancer, compared to only 5% when using ultrasound.

We put our final model into practice, using the microRNA diagnostic test to predict the diagnoses of 51 patients presenting for surgical care in Lodz, Poland. In this population, 91.3% of the abnormal test results were ovarian cancer cases and negative test results reliably predicted absence of cancer about 80% of the time, which is comparable to the accuracy of a Pap smear test.

What are the next steps in order to take this test from the lab to the clinic?

We need to verify how microRNA signature changes over time as risk of ovarian cancer increases. We are currently investigating the group from the NIH study called the PLCO (Prostrate Lunch Colorectal & Ovarian Cancer Trial), involving 78,000 women within the period 1993-2001. We collected blood samples from these women and followed them for 13 years. A portion of them ended up being diagnosed with ovarian cancer. This study helped us understand the limitations of CA125 and ultrasound tests. After the successful results from our current study, the NIH has agreed to send us 600 samples. This will be a blind study, and a lot like doing a clinical trial. We would not know which of the samples have ovarian cancer. We will generate the data and send it back to the NIH, and they will do the analysis on our algorithm and connect it to their clinical data.

What is your perspective on the future of scientific research?

As scientists of this generation, we need to inspire our youth to take an interest in science, conduct research and think about solving complex problems. There is a lot to be done in the cancer research field. We are still in the early days and cancer is an epidemic. Almost every person in the world has been affected by cancer or knows someone who has been affected by cancer. As a community, we need to fight cancer in different ways and inspire the younger generation to join the battle.

Did you choose ovarian cancer or did it choose you?

The reason is very scientific. Ovarian cancer, in my opinion, is a DNA repair disease and my lab primarily focuses on DNA repair. Based on sequencing data that has come out in the last 5 years, over 50% of ovarian cancer tumors have a defect in their DNA repair machinery. That is a higher percentage than any other cancer tumor types we know of. I started out looking at the more basic biology around DNA repair but as I began to ask, “why is this important?” and the first thing that came to mind was ovarian cancer.

In your opinion, how is Tina’s Wish different from other organizations?

Tina’s wish is unique in its focus. Foundations with a non-specific approach sometimes get diluted. A strong effort in early detection makes Tina’s Wish stand out. I particularly like this about the foundation because it makes it easier to work with the other grantees. Everyone has the same common vision. It helps to have people in the room that are focused on one very specific goal.